The present 16th Morecambe was first officially registered with Imperial Headquarters, as it was then known, on the 28th February 1957, although it is clear that a Group had existed in Torrisholme prior to this date.

A former Scout, the late Barry Ayre, has now shed further light on the beginnings of the Group. Read his memoir here and see some photos from 1952 here.

Phil Rowland, who was a Cub and Scout in the 1960’s, has also sent me some photos of his uniform and badges. Phil now lives in Grange and on a recent visit to Morecambe we shared memories of some exciting times in the 16th.

A meeting of the Local Association Executive Committee held on 14th August 1945 . . .
“The Resignation of Mr W. Gregory** as G.S.M. of the 16th Group was accepted with regret and the Secretary was asked to write to him to this effect and to thank him for the good work he had done on behalf of Scouting and our wish to have him working again with us at a future date.”

A meeting of the Local Association Executive Committee held on 26th March 1946 . . .
“The secretary reported that he had in his possession the sum of Seven Pounds ten shillings and sixpence which was handed to him by Mr W. Gregory on the closing of the 16th Group; and on the proposition of Mrs Bland, seconded by Mrs Ball, it was resolved that this sum be handed over to the 4th Group for their use, as they had taken over such boys of the old 16th as were willing to go to them.”

A meeting of the Local Association Executive Committee held on 5th December 1946 . . .
“16th Cubs – Mr Ames suggested that Mr Driver pay a visit to the 16th in order to persuade some of these boys to join up with the 4th. Mr Driver undertook to do this.”

A meeting of the Local Association Executive Committee held on 11th September 1947 . . .
“Present – includes Miss Pennell (Thelma Pennell b. 1930) & Miss Nowill – could be Jean Nowill b. 1930 (16th).”
The A.D.C. spoke of meetings with Mr Bruce of Torrisholme regarding the formation of a troop at the 16th Group. Mr Catterall was hopeful of eventual success.” 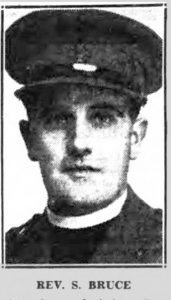 The ADC introduced Mr Barker as Scouter in the newly formed 16th troop. Mr Driver promised to consider a claim by the 16th for a share in the proceeds of a joint effort by the 4th & 16th groups.
Mr Barker asked for & received permission to change the colours of his group scarf.” (unfortunately the Secretary did not record details of the old or the new colours)

Morecambe Guardian 11 September 1948:-
Wilfred Pickles ** Hands Over First Colours to Ascension Pack
WILFRED PICKLES presented the Church of Ascension Pack with their first colours at the Torrisholme Gala on Saturday. They were received by Terry Robinson, who very proudly carried the flag off the platform after Wilfred had unfurled it for him. In bright yellow, with the wolf mascot and cub motto in green, it lent another touch of colour to the Gala. Scouts and Cubs of the troop made themselves useful selling programmes and doing odd jobs.

A sum of £8.15s was raised by the 16th Morecambe Boy Scout Group attached to Torrisholme Church of Ascension through a jumble sale held in the church hall on Saturday. The vicar, the Rev. L. Stewart Bruce, who is also Scoutmaster, was in charge.

Local Association AGM held on 24th May 1951 . . .
“Secretary’s Report 1950 – 51. The Lupton Trophy Competition which takes the form of a camping weekend under the constant eye of 2 examiners was won by a patrol of the 16th Torrisholme Scouts. The Walker Trophy given in memory of one of our Scouters was also won by the 16th. This comp. is based on 2nd class work.”

A meeting of the Local Association Executive Committee held on 21st June 1951 . . .
“Correspondence – The 16th Scouts asked permission to use the camping equipment in Mr Beckett’s care. This was the property of the 1st Group. Permission was granted – it being understood that the gear would be returned  to Mr B, DSM.”

A meeting of the Local Association Executive Committee held on 13th Mar 1952 . . .
“Correspondence – The resignation of Mr Barker ASM of the 16th Mcbe was read. The meeting was sorry to learn of this & Mr Barker’s ill health. The Secr. would write to Mr B. Mr Spencer who has worked with the 16th said he would be willing to take out a warrant.” (8 May 1952 – “It was reported that Mr Spencer was now unable to apply for a warrant for the 16th.”)

Local Association AGM held on 31st May 1954 . . .
“Secretary’s Report 1953 – 54 – During the year 1953 -54 the Association has lost the 8th & 16th groups bringing our number of groups to 7 . . .  The reasons for 2 groups being dissolved are a) shortage of accommodation b) the difficulty of getting a Scouter. There is nothing new in these difficulties  & the provision of Scouters is entirely an internal problem.”
“The ADC brought up the instance of a Queen’s Scout going to Windsor whose troop had become defunct & who had given it good service over the past year. It had been the practice of groups to pay out of pocket expenses up to £2 for their own scouts so honoured & be hoped that the LA would see fit to grant such an amount to Barry Ayre as he now had no group behind him. The meeting agreed & added a hope that when the 16th affairs were either re-started or wound up properly the group funds would re-imburse the LA funds for this amount.”

1st July 1954 – “The Treasurer reported the receipt of £2 from the 16th Group to re-imburse the LA for grant to Barry Ayre.”
“Miss Gray gave a report on the Cub sports & hoped we would express thanks for the use of the Lancaster Rd Ground. She raised the detail of the 16th Pack not now being registered owing to there being no Scouter for the Scouts. Mr Winn (Field Commissioner) said it would be better not to have Cubs if there was no future for them after 11. Mr Todd (DC), (who said he enjoyed interviewing persons) agreed to visit the Rev. L.S. Bruce GSM of the 16th.”

10 March 1955 – “it was reported that the 16th Cubs were in danger of being disbanded. The DC said that a new incumbent was about to take over at the Church of the Ascension to which the Cubs were attached, and that he would be seeing him when he arrived, and that he would report later on the possibilities.”

Returning to 1957, the registration form completed by the Group Scoutmaster the late Ronald Preston, who, owing to his follicly challenged pate, was affectionately known as “Slabhead” by those who also knew him as a Maths Master at Morecambe Grammar School (your humble writer being one of those in question), was signed by the Rev. Colin G. Yates for the Sponsoring Authority and by the late Max Melling as Commissioner for South Lonsdale District. The numbers recorded at the date of application were 1 scouter, 16 wolf cubs and 8 boy scouts.

At this time the Group met in the old “nissen” hut (q.v. this newspaper article from 1956) belonging to the church, which linked the church with the new hall, and where the choir vestry now stands. Facilities however were not ideal and it was decided to build a new headquarters; a move which was precipitated by the sudden collapse of part of the nissen hut structure. Permission was granted to erect a new sectional wooden H.Q., a former canteen building used at Trimpell, on land to the rear of where the vicarage now stands. Construction was started in 1959 under the direction of the new G.S.M. Harry Brooks, Ronald Preston having left the district, and carried out with the help of parents and Senior scouts.

In the early sixties the Group prospered under the leadership of Joyce and Harry Brooks, ably supported by an active Group Committee, chaired by the Rev. Yates, and numbers increased steadily so that a second cub scout pack became necessary. In addition there was also now a Senior Scout Troop. An active programme was carried out by all sections and several camps were held abroad.

One notable camp took place at Wray Castle on the shores of Windermere in 1966. Read a newspaper account of the time and see my photos.

At the time when the new vicarage was being built it became apparent to the Committee that a new site would have to be found for a permanent H.Q. which would be both larger and have facilities which were lacking in the hut. Land for this project proved very difficult to find, but eventually after several years of enquiries agreement was reached with the Lancashire County Council Estates Department to lease the present site on which our magnificent new H.Q. now stands.

Since the 60’s the good work has been continued by a succession of dedicated leaders, backed by enthusiastic supporters, and today the Group numbers some 80 members. In 1967 the Senior Scout Troop joined with others in the Morecambe area to form a more viable District Venture Scout Unit, and this was named the “Scorpio” V.S.U. Subsequently Ranger Guides were also incorporated, and this Unit continued to operate for a number of years until it regrettably had to close owing to lack of leaders.

The late Elma Eastwood sent me this photo from the Troop’s camp at Kandersteg, Switzerland in 1973: 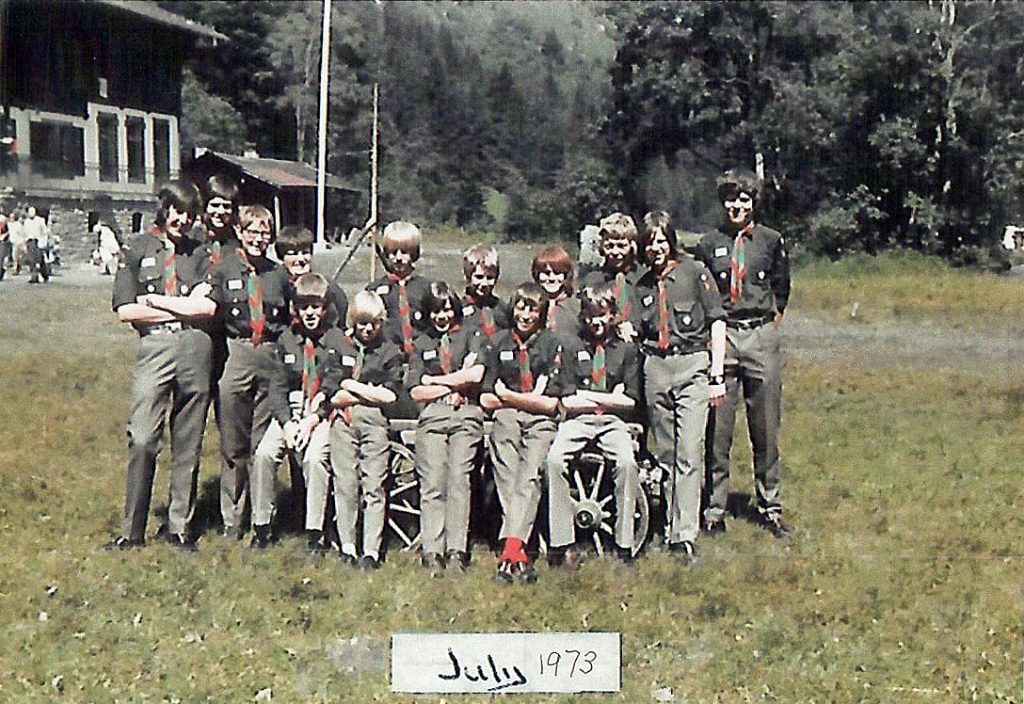 A high standard of training and service has been a feature of the Group’s programme over the years with numerous Chief Scout’s and Queen’s Scout Awards gained. Four scouts from the Troop were the first in the County to be awarded the Chief Scout’s Challenge badge. To see the Troops of ’79, 81,  ’93, 2000, 2007 & 2012 Click below. 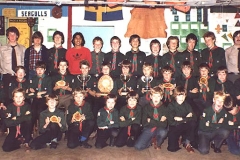 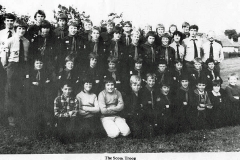 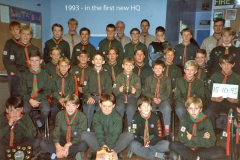 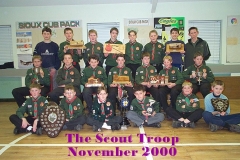 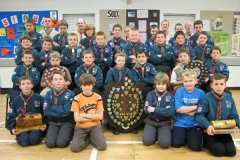 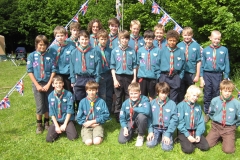 [Show slideshow]
On one of the most auspicious days in the Group’s history, the new HQ was officially opened on 15 July 1981 by HRH Princess Alexandra in the presence of the Lord Lieutenant, the County President the late Lord Derby, the County Commissioner Bob Sutton – representing the Chief Scout, their Worships the Mayor and Mayoress of Lancaster, County & District Scout officials and Group representatives. 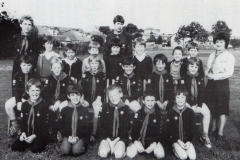 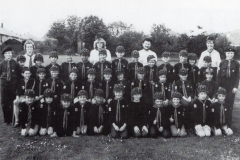 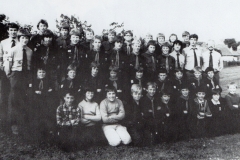 Sadly in December 1996 this building was gutted by a fire started by a group of vandals in waste paper to the rear of the premises. Although the Fire Brigade were on site very quickly they were unable to save the building and were lucky not to have loss of life when there was a flash-over whilst firefighters were inside. 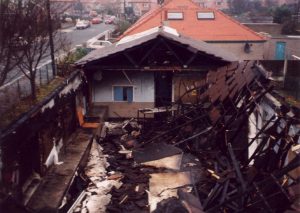 A new HQ rose quickly from the ashes, paid for mainly from insurance cover, and this is the building in use today. We will remain grateful to the Methodist Church authorities in Torrisholme who kindly offered us meeting facilities during the rebuilding period. 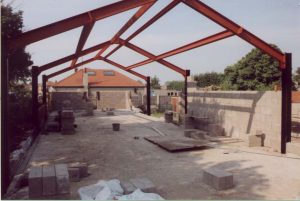 In recent years highlights, as far as the Troop are concerned, have been a series of enjoyable annual camps to many and diverse destinations (see the Record of Annual Camps page) particularly to Europe and the Kandersteg International Scout Centre. Also, there has been a remarkable series of excellent performances in local, county and regional competitions with the Troop winning the Lonsdale Annual Challenge Trophy for the best overall performances in the District for 11 years consecutively. There have been several Chief Scout’s Awards gained as well as Chief Scout’s Challenges completed.

The Group also had the honour on 3 December 1997 of being invited by HRH Princess Alexandra to form a Guard of Honour for her outside Lancaster Museum on the occasion of the reopening of the King’s Own Royal Regiment Museum. 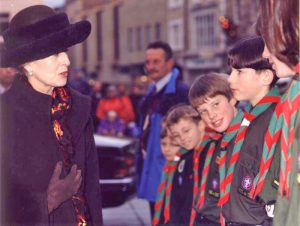